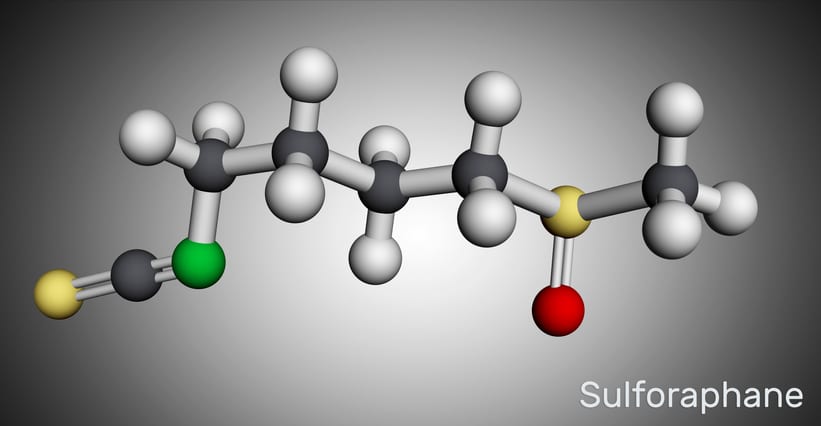 Sulforaphane is a phytochemical that is a powerful antioxidant and anti-inflammatory properties. Numerous studies report that sulforaphane protects against cardiovascular disease, neurological diseases such as Alzheimer’s disease, Parkinson’s disease, epilepsy, stroke, and multiple types of cancer.i

It is commonly believed that sulforaphane, which belongs to a class of compounds called isothiocyanates, occurs in cruciferous vegetables such as broccoli, cabbage, cauliflower brussels sprouts. This is a mistake, as these vegetables DO NOT contain sulforaphane. These veggies contain substantial amounts of a sulfur-rich compound named glucoraphanin, which belongs to a class of glucosinolates. When these vegetables are chopped, chewed, or juiced, an enzyme called myrosinase is released, converting the glucoraphanin into sulforaphane. Broccoli contains the highest amount of glucoraphanin, which can ultimately be converted into sulforaphane.

Myrosinase enzymes in cruciferous vegetables must be released to convert glucoraphanin into sulforaphane. However, myrosinase enzymes are easily destroyed during storage and by heat. Therefore, cooking methods, including steaming, microwaving, boiling, and stir-frying, destroy the enzymes, preventing sulforaphane formation.ii

Sulforaphane is a Postbiotic Metabolite

This is yet another example that emphasizes that postbiotic metabolites are compounds that regulate and control many aspects of human physiology and health.